Get fresh music recommendations delivered to your inbox every Friday.
We've updated our Terms of Use. You can review the changes here.

Just One - LEM029 (including Unreleased Mixes) 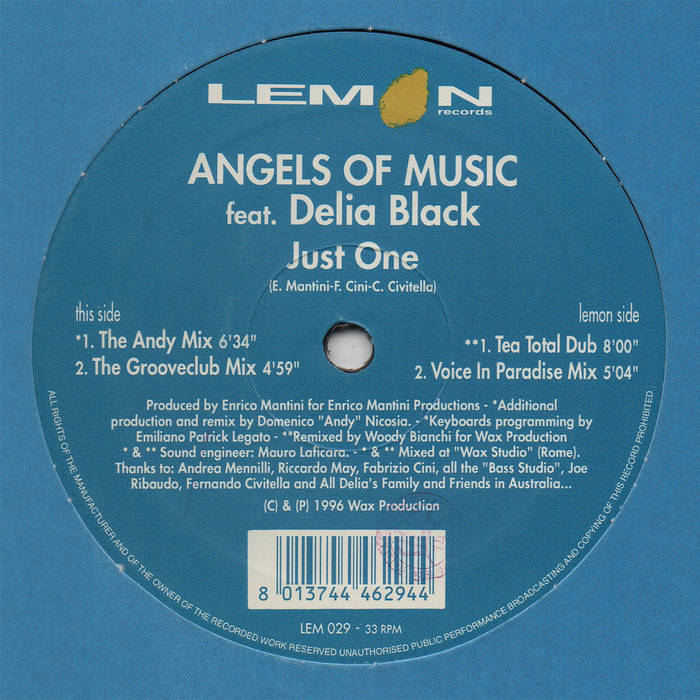 Angels of Music was an alias I used twice in the 90s, mostly to sign collaborations made with friends.

this one saw me joining the Italo-Australian singer Delia Black and my homie Fabrizio Cini, who helped me writing the vocal line for the song and some piano parts.

as a release it was the second one made under this alias and also the last, before I decided to abandon (temporarily) House Music in 1996 and move to Drum ’n Bass creating The Fast Runna project.

the song ‘Just One’ got a first press on vinyl in 1995 by the Italian imprint Lemon Records, where only The Grooveclub and the Voice in Paradise mixes made their appearance together with two remixes by Gino ‘Woody’ Bianchi and Domenico ‘Andy’ Nicosia.

during the same year the ‘Nocturnal Coition Mix’ got featured in the Italian Acid Jazz compilation CD #16 alongside tracks from artists like Bobby Caldwell, Omni Trio, Silent Poets and Bossa Nostra to name but a few.

in 1996 another couple of remixes by Emiliano ‘Pat’ Legato and Vanni Giogilli & Favilli came out on a new vinyl press alongside the ‘Nocturnal Coition’ Mix, which became by a typo mistake the ‘Soul Sensation’ Mix.

without any doubt 1995 marked a change in my musical path, mostly because UMM was gone, whilst the Italian Underground House scene was soon destined to fade out in favour of a disco influenced house, which I never particularly liked. So, I started developing something more musical and melodic, evolving from what I already experimented with the original mix of X Woman’s ‘What U Want’.

1995 was also the year when I bought a second hand Roland Juno 106, underrated at the time, and which was extensively used in producing all ‘Just One’ versions, with sounds spanning from basses to pads and leads…

today I’m offering you here on Bandcamp 6 unreleased versions I realised plus the 3 which were printed on vinyl with the first and second press.

they’re all far away from the style I’m known for but, still part of my catalog :)

hope you enjoy them !

Bandcamp Daily  your guide to the world of Bandcamp